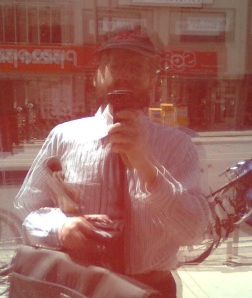 When I was 17 years old, I needed money for books and transit for college next year, so I needed a job. All I had back in those days was my friends and neighbours, the newspaper classifieds, and my two feet. The latter were put to good use as I went into each store to inquire about work, up and down Yonge Street and along Eglinton Avenue West. While it was a classmate who got me a job as a cleaner at the Eglinton Theatre, I was considered by some of the store owners as a possible hire, so it was not a fruitless effort. I also lost 10 pounds from all that walking!

Flash forward to the modern age of the Internet and Ipads in the 21st Century. I posed a question during a workshop on “The Hidden Job Market” to a presenter about “pounding the pavement” to find work (a question that I will ask again at another job search centre during a second workshop). I was told, bluntly, that “no one does that any more, because it’s inefficient and you should concentrate on your network of contacts”.

Well, I’ve been concentrating on my contacts for the last two years. While I’m not blaming any of them for anything, as they have been really amazing in passing tips and suggestions on where to send my resume, I still haven’t found a job. I’m also in the same position now that I was when I was 17 years old, but it’s not books and the Metropass that I need, it’s rent, food, and everything else. I’m running out of money and I am running out of time. With the summer here and companies entering into hiring hibernation because people have vacations and barbeques on their minds, I knew I have to do something. It was at that point I remembered my first steps taken to landing a “real job” when I was a teenager.

I figured since I’m not getting as many calls for interviews from my job applications online, it was time to try a little experiment. On Saturday (June 16) I woke up at 7:30 a.m. to prepare to canvass the stores at Eglinton and Yonge. I had breakfast, washed, trimmed my beard, printed some resumes off and placed them in the bag you see in the picture, put on a clean shirt and tie, and went out the door.

I will admit I was feeling a little blurry that morning (and you thought it was my cellphone being out of focus?). Rising early on a Saturday is practically a heresy my body and spirit reminded me repeatedly about as I was getting ready to go, but out the door I went despite the protests. I spent a little over 4 hours walking up and down Yonge Street and along Eglinton East, visiting stores and offices and companies to inquire about jobs. The response from the people I spoke with ranged from indifference bordering on rudeness to very supportive and helpful. Here are three examples from the latter group that I felt justified my efforts. I won’t mention the name of the people I spoke with, but I will mention the company names: Chapters-Indigo, CIBC, and Carlton Cards. Interestingly, all three were at the intersection of Yonge and Eglinton, though I think that was just coincidence. Before I continue, I’d like to say to those three companies that your staff have excellent customer service skills. Well done!

The young lady at Chapters-Indigo was really pleasant and told me that applying for positions at the company was done online after setting up a profile there. That conversation lasted about 2 minutes but she did give me the URL to go to and wished me luck in my job search.

A woman at CIBC really went the extra mile for me. I got the impression she was the assistant manager, but I was not sure. All I remember is that the moment I walked in the door, she came to me and asked if I needed help with anything (very nice!). When I told her I was looking for information on how to apply to this CIBC branch for any positions available, she spent just over 5 minutes explaining to me on the many ways that I could apply at CIBC, including filling out a profile online. She also offered to take my resume and personally deliver it to the bank manager of the branch. When she noticed on my resume that I was in information technology, she enthusiastically told me it was a good career to be in and that I should continue along that track, adding also that she wished she was in information technology. She clearly had great people skills.

For Carlton Cards, I had to wait in line to speak to someone at the cash register, which I did not mind too much as it was a short wait. I explained to her that I wanted to apply for a job at this store. She said I could fill out an application form but there were no openings available. She did take my resume, though, and was very courteous and friendly. That conversation was the shortest, about 30 to 45 seconds.

So, what’s my final take on this experiment? Well, I think it’s worth continuing for the summer at least, since I’m not getting as many call-backs to positions I applied for online at places like Monster, Workopolis and TorontoJobShop. Since that Saturday morning, I’ve gone to other businesses near my area to personally hand-deliver my resume. There’s nothing wrong with tweaking a job-search plan a bit to try to get more nibbles.

Besides, it’s the summertime! Shouldn’t we be outdoors more during that time?

For those of you who have been following this blog since I started in March 2012, I’ve been looking for work since January 3rd 2010. That’s nearly 2.5 years or, more precisely, 899 days of unemployment as of this post date.

I’ve been asked a few times if I get depressed for being out of work for so long despite my efforts to find a job. Until recently, my answer has always been no, because I know that even if things get so bad if I end up living in a shelter if the money runs out,  I still have my health and my wits. In addition, getting depressed is not going to change my employment status. The only thing that will change it is continuing my job search.

Note that I said “until recently”. At the beginning of this month, I came across what could be my very first “emotional flat tire”.

I don’t know when the warning signs started, but I suspected they appeared shortly after a conversation with my new contact with Career Foundation after my current one left for new opportunities. I won’t mention this new person’s name, so let’s call her “Aileen”. I gave Aileen a phone call to arrange for a time to meet to discuss what things I should implement in my job search. I got the impression Aileen was not having a good day because, unlike many others at Career Foundation who are generally very cheerful and polite, she was terse and abrupt with me. She suggested that I take the workshop courses to enhance my job search. My reply to that was that I already took the interview critique, resume writing, and hidden job search workshops, which are the big three everyone looking for work should take, and I needed something new to try since I had a few months of savings left. Before I could finish, she snapped at me that “Career Foundation is not here to give you a job, that’s your responsibility!”. Normally, I would have handled that in stride. I know how to handle rude people both in the workplace and in my private life. While I was not angry with her in kind, I was upset. I told her and later the branch manager of that Career Foundation office that I wanted my file closed. Boom. A year as a client of theirs done.

I don’t regret that decision, as Career Foundation had stopped being a valuable source of information for my job hunting. I was getting the same advice I already knew on how to find a job and my previous contact before Aileen stopped arranging meetings with me. I just could have handled the parting of ways better.

That incident with Career Foundation was not the only warning sign, it was actually one of many to come.

Some friends of mine treated me to a movie (“Marvel’s The Avengers”) for my birthday, and I was looking forward to seeing it. Well, I think I was looking forward to seeing it, or maybe I was trying to psych myself up for it because I should have been looking forward to it, but wasn’t. Throughout the movie, while everyone cheered and laughed, I found that I really wasn’t enjoying it. It wasn’t because it was a bad movie, it was in fact a fantastic movie. It’s just that deep down inside me there was some stirrings of excitement and humour bubbling about, but it was not reaching the surface for some reason. A few of my friends noticed this and asked if I was feeling okay. I told them I was fine and thanked them for being great friends for treating me on my birthday. They were satisfied but I knew I was not. Something was wrong.

My malaise leaked into my regular morning job search routine. I had trouble getting out of bed at my usual time to read the newspaper classified. I didn’t search as aggressively on Monster, Workopolis, and the other search engines for job openings. I did not renew my Craigslist and Kijiji “David Needs A Job” and “Looking To Automate Some Tasks?” ads, so both sank down into obscurity. I also stopped posting to my this search blog: that’s why there is nearly a month long gap between this current post and the last one on May 30th.

It got to the point where even the simpliest efforts felt like major chores to complete and the things that used to bring me joy stopped doing just that. One day I just said “blazes with this” and did not look for work. In fact, I didn’t do anything for a few days.

But that’s okay. It was needed. It was necessary. While I can’t remember every little thing I did during those few days, most of it was going out for walks searching inside myself for answers. I guess you could say I was going through a bit of an internal reset trying to figure out where things derailed. I can’t say if I found the answer to everything but after a bit of walking, talking to those who had personal life issues that were far greater than anything I was going through, and taking a more realistic assessment of my options, I got over my blue funk. The next day I was back at my regular job search routine as if nothing happened. I signed up at St. Stephens House Community Centre for job search assistance.  My Kijiji and Craigslist ads have been renewed.  I have been on a number of interviews, and found new people to network with.

I know that this won’t be the last time I’ll have “emotional flat tire” days like this, but at least I have an idea of what to do if it does happen again, and that is to take a day off the job search beat to take a perspective break.

P.S. I went back to watch “Marvel’s The Avengers” a second time. This time, I really did enjoy the film.

UPDATE, July 18th, 2012: A fellow who runs an excellent job search blog captured perfectly how I felt on that day I got the emotional flat tire.  I suggest you follow his blog on a regular basis.

Warning: Just like the gentleman cautions, there’s some “potty-language”.